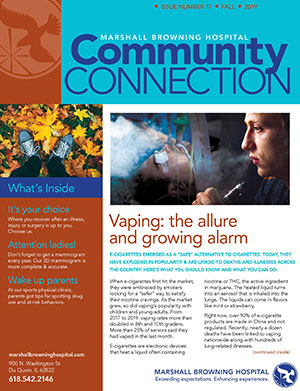 A total of 24 teams participated in the four-person scramble. Prior to tee-off, a beautiful engraved bench was dedicated in memory of Bill Wilson, long-time supporter of Red Hawk Golf Club and Marshall Browning Hospital's golf scramble. Lee Wilson and her children, Greg, Josh, and Anna, as well as grandchildren and friends were in attendance for the dedication.

The 'funnest foursome' was awarded to the Marshall Browning Hospital employee team consisting of Samantha Albers, Sherry Wertz, Chris Albers, and Lance Jones. Winner of the Longest Drive on hole #13 went to Morgan Heisner, Closest to the Pin on hole #3 was Brian Flath, and Longest Putt on hole #18 was awarded to Dan Rieman. Winner of the 50/50 was Dale Behlmann of the MMS team.
Vogler Motor Company of Carbondale generously sponsored a hole-in-one prize including a new 2010 Ford Fusion, as well as other auxiliary prizes for Par 3 hole-in-one contests. There were no winners of the hole-in-one contests.

Marshall Browning Hospital would like to thank those who supported the 9th Annual Charity Golf Classic by playing on a team and the area businesses for their generous support of hole sponsorships and door prizes. A special thanks is given to Sam and Liz Macaluso for their outstanding efforts that contribute greatly to the success of this event.