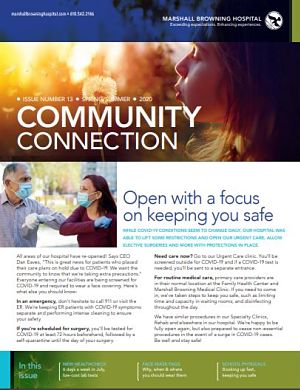 Du Quoin, Illinois - April 1, 2010 - Marshall Browning Hospital in DuQuoin celebrated National Doctors' Day on March 30th with "A Day at the Oscars." Physicians were invited to a breakfast on Tuesday morning to celebrate Doctors' Day. As physicians arrived, they were escorted down a red carpet as their pictures were taken next to a life-size Oscar statute, and presented with a red carnation. Physicians were then treated to a wonderful breakfast prepared by the Dietary staff. Breakfast was served in the conference room which was decorated with an Oscar theme. Following breakfast, hospital staff began pouring into the conference room awaiting the announcement of the Oscar awards. William Huff, CEO was the emcee for the event. He announced that the voting for the awards was done by the hospital staff and certified by the firm of H & H (William Huff, CEO and Brice Harsy, CFO). Special music was played with the announcement of each award. Those physicians receiving Oscar awards included the following: "Is most likely to play a doctor on TV" - Dr. Andrew Yochum; "Is the most dapper (Best Dressed)" - Dr. Gladstone Tucker; "Is least likely to wear a tie" - Dr. Craig Furry; "Is most likely to be called Coach" - Dr. Patrick Riley; "Is most likely to win on Jeopardy" - Dr. Terrence Hall; "Is most likely to win American Idol" - Dr. Atkavi Sawadisavi; "Has the voice that could calm any storm" - Dr. Manu Tongwarin (unable to attend); "Has the smile that can cure whatever hurts" - Dr. Andrew Yochum; "Can be called Dr. Techie (Biggest Gadget Guru) - Dr. Craig Furry; "Is most likely to win on Survivor" - Dr. Terrence Hall; "Has the best handwriting" - Dr. Patrick Riley. Each physician was presented with an Oscar trophy and gift of appreciation from the hospital. Memorable acceptance speeches were given. "Doctors' Day is a way that we can show our appreciation for all the hard work that our physicians do," said William Huff, CEO. "It's also a fun way of interacting with the physicians and employees. Working in a hospital is not an easy job and the work that we do is very important at Marshall Browning Hospital. Doctors' Day is just a way that we can thank the physicians who have dedicated their lives to practicing medicine to benefit patients and the community as a whole." The history of this special day dates back to the 1800's when an American Dr. Crawford W. Long became the first physician to use anesthesia in an operation that he performed on March 30, 1842. To commemorate this unprecedented event, March 30 was declared as National Doctors Day in the United States. The red carnation was chosen as the official symbol of Doctors Day because of the color of the flower denotes love, sacrifice, bravery and courage, all of which are synonymous with the medical profession.