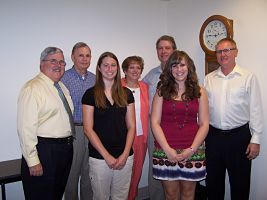 Du Quoin, Illinois - July 6, 2010 - Marshall Browning Hospital in DuQuoin awarded their second $1,000 four-year health career scholarship to Lindsey Chapman of Du Quoin. Lindsey plans to attend Kaskaskia College where she will pursue an Associate's degree in Radiologic Technology. After graduating from Kaskaskia College, she plans to continue her education to specialize in radiation therapy. Lindsey is the daughter of Rod and Cindy Chapman of Du Quoin. Lindsey was formally recognized at the District #300 Foundation Dinner on May 1. The Hospital Scholarship Committee hosted a breakfast in honor of Lindsey, as well as last year's recipient, Chelsey Varner, on July 6 at the hospital. The Scholarship Committee is comprised of hospital board members Richard Haines, Kathy West, Don Hoffman, Mark Maclin and William Huff, CEO. Within four years, the hospital will be paying out $4,000 each year to local students who are committed to furthering their education and working toward a healthcare career. It is one of the many ways Marshall Browning Hospital is giving back to the community. Pictured are: Front Row (L to R)- William Huff, CEO; Chelsey Varner (2009 Winner); Lindsey Chapman (2010 Winner); Don Hoffman. Second row - Richard Haines, Kathy West and Mark Maclin